Vichy French in the New Congress 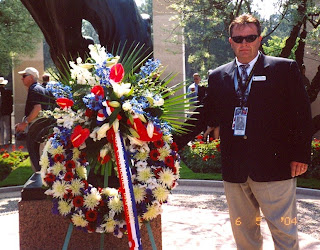 Don Amador at Omaha Beach Memorial in France
Since the November 2 elections, The General has been reflecting on a number of issues related to land-use politics.

In 2009, HQ wrote about Mark Rey (a former timber lobbyist who was a cabinet officer in the Bush administration) who took a job with Wildlaw, a law firm that specializes in anti-OHV and anti-timber lawsuits.


While HQ sarcastically gave Rey some kudos for winning that job, implicit in those accolades was a profound disappointment that somebody who was a trusted conservative would take a post with our political and philosophical opponents.

The General has often shared his frustration (with riders and even some of my environmental contacts) with the Bush administration’s almost total lack of support or oversight for recreation issues on FS and BLM lands. The OHV community that I work with was initially optimistic that Rey (in his role as Undersecretary of Agriculture that had oversight of the FS) would be sympatric to our issues.

Sadly, the Bush administration’s (and Rey’s) “hands-off” management style allowed closure advocates in the agencies to develop anti-OHV programs such as TMR and the landscape level closure at Clear Creek. Frankly, I don’t think Timber folks got much better treatment.

You can make excuses (some may actually be legitimate) for the Bush years that they got hit with two wars and Katrina. But the fact remains that having a disinterested undersecretary who paid little if any attention to recreation issues did not help our cause rise about the other distractions.

As conservatives take over control of the House and have an increased presence in the Senate, the question should be asked what role if any a trusted albeit ineffective former conservative should have in post election strategy sessions?

HQ remembers there were apologists for the Vichy French during WW2. However, that term is forever associated with people who cannot be trusted. The General wonders how history will judge folks like Rey who took a job with a political opponent?