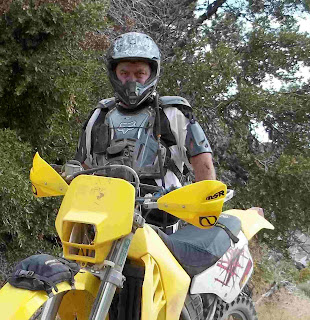 The General on One of the OHV Trails in the Stonyford NCA Plan
The Recreation HQ is back on the trail after a brief hiatus during the 2010 Election Cycle. As some of you know, there are a number of Wilderness, National Monument, or National Conservation Area proposals throughout the country pending action in the Lame Duck Session of the current Congress or waiting for action by the president via executive orders if they are not voted on and passed in the Lame Duck Congress.

Today, the BRC issued a national alert regarding its concerns about an Omnibus Lands Bill being voted on and passed into law between now and when this Congress adjourns.

HQ agrees with the BRC position that land-use bills should be bill-specific and decided on an acre-by-acre analysis with a substantive stakeholder process. These bills should not be lumped into one massive one-size-fits-all land-use plan.

As you know, some environmental groups are proposing legislation for a National Conservation Area that bisects the main Stonyford and Upper Lake OHV Areas on the Mendocino National Forest. The General, on behalf of BRC, has communicated that it does not feel a NCA designation is warranted for this area and is a bad idea. However, we have stated that if a NCA bill is proposed that it has language to protect existing OHV recreation, permitted OHV events, and other recreational uses of the affected area.

It is important for you to communicate with your elected officials (that are still in office) that you do not want an Omnibus Lands Bill voted on in the Lame Duck Session of Congress.

Send this letter today so the Lame Ducks have this on their desk when they return to the Hill.

Thanks for your service!
Posted by Don Amador at 3:27 PM