Marines' Johnson Valley DEIS is Flawed - Comments Due May 26! 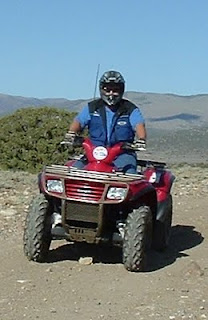 As many of you know, the Marines at 29 Palms have proposed to expand their base of operations into the popular Johnson Valley OHV Area. Back in 2008 and 2009, a number of OHV groups, local governments, and other stakeholders challenged the premise of the proposal and wrote comments in strong opposition to the expansion.

In the 2009 BRC comment letter, the “need” for three Marine Expeditionary Brigades to train simultaneously was challenged. Another question was raised about why the Marines are developing a proposal based on an outdated segregated training model instead of looking at a 21st Century integrated training model? Also, the Marines were asked about how this proposal would be funded considering the current fiscal crisis and ballooning national deficit?

HQ Blog on the NOI with Various Letters and Comments
http://thegeneralsrecreationden.blogspot.com/2009/02/ohv-groups-say-closure-of-johnson.html

HQ’s initial impression after a quick review of the DEIS is that the agency has failed to answer the aforementioned questions. This proposal appears to have little to do with current and projected battlefield scenarios. Rather, this proposal appears to be politically motivated and has the same merit as a Navy Base Commander wanting to reactivate 3 battleships and then do a front-loaded expansion plan to support it. While that might have some emotional attraction, that plan would be just as irrelevant as the Marines claimed “need” to have three MEBs train together in what was once a popular recreation area.

Another process issue is that the scoping document did not daylight the DEIS’s post-scoping arbitrary decision criteria that was used to basically disqualify numerous public comments and ideas such as using other federal military facilities and reclassification or re-designation of other public lands.

HQ believes that the DEIS as presented is seriously, if not fatally, flawed. Those of you who commented should review your comments and point out to the Corps where you feel they missed the boat.

Again, HQ’s opposition should not be taken as a slight against our military. But rather as opposition to bad decision-making by federal officials. Please get your comments in by May 26, 2011.

For information on the DEIS, please see the BRC alert on this subject
http://www.sharetrails.org/alerts/?alert=1324

Thanks for your interest in this subject.
Posted by Don Amador at 2:33 PM No comments: 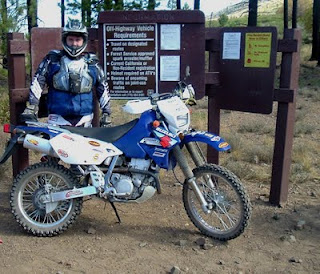 Don on a Ride Reno DS Event
Throughout the West there is a growing movement among some federal land management units to functionally ban OHV (and even some non-motorized) permitted events. Just recently, BRC’s, Don Amador, was contacted by the Reno Dust Devils Motorcycle Club regarding just such a case in the BLM Carson City Field Office.
In response to that request, a letter was written to Congressman Dean Heller asking him to review this issue.

Some of you may have been following a similar situation on the Eldorado National Forest where basically ALL permitted AMA sanctioned-events have been administratively banned.

As you know, a federal line officer (Forest Supervisor/Area Manager) has 100% discretion (without review or appeal rights) regarding the authorization of permitted events. If that line officer is biased against OHV events or if they have been threatened with an eco-lawsuit - by a vexatious litigant if they allow an event - it is quite easy for them to kill events by creating a mountain of red-tape or requiring a cost-prohibitive environmental planning document.

HQ is convinced that the long-term solution is for Congress to fix this issue with legislation that encourages OHV events at designated OHV areas, fishing derbies on fishing lakes, ski events at ski areas, and rock climbing competitions at popular rock climbing areas. The current regulatory atmosphere makes it all too easy for line officers that do not want permitted events on their units to simply create a red-tape hurdle that volunteer clubs cannot climb.

Thanks for your service!
Posted by Don Amador at 7:41 AM No comments:

BLM/EPA Weighed in Scales and Found Wanting at Hollister Meeting 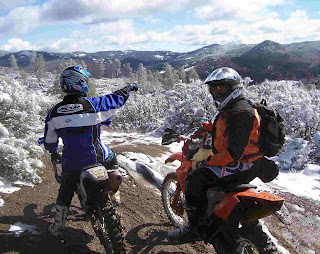 SRMC Member Points to CCMA Trails
Based on feedback from riders and club representatives who attended the OHMVR Commission meeting in Hollister yesterday, the BLM and EPA were weighed in the scales and found wanting. Very disappointing when riders showed up to view federal integrity and accountability and found none of those virtues on display.

HQ commends all those who showed up and continued to challenge the faulty science (even the BLM/EPA have said there were uncertainties from the beginning) used by the BLM as a poor excuse to effect the largest landscape level closure of its kind in U.S history.

HQ also commends the OHMVR Commission for voting (and showing accountability and integrity) to send a strong letter to Congress, elected officials, and government agencies. Among a number of questions, they will ask about the BLM/EPA’s continued determination to base the ongoing closure on flawed science and how that unexplainable stubbornness -- in the face of new science -- complies with the March 9, 2009
Presidential Memo on Scientific Integrity.

HQ believes it may be time for the OHV leadership in CA to consider a “vote of no confidence” for the BLM/EPA line officers that have failed to properly discharge their duties.

The BLM/EPA can save their credibility if they just come out and admit they made a poor decision. BLM could accept the new science and reopen CCMA to historic OHV use if they wanted to. The ball is in their court.
Posted by Don Amador at 1:59 PM 2 comments: 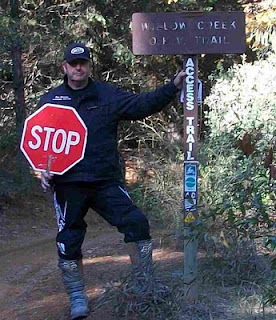 HELP STOP THE BAN ON YOUTH SIZED OHVS﻿
HQ wants to issue an action alert regarding the lead ban issue for youth sized OHVs. Many of you got alerts from AMA and others last week about Senate Amendment 264 to Senate Bill S. 493.
April 1 Article on SA 264 and Lead Ban Issue Update
http://www.motorcyclistonline.com/newsandupdates/motorcycle_news/122_1104_new_senate_amendment_to_end_ban_on_youth_recreational_vehicles/index.html

Within that article is an AMA alert where they direct you (and make it easy) to call the office of your U.S. Senator.  The MIC News Release has action links as well.

HQ believes it is critically important to make those two phone calls. HQ already made its calls to Senators Boxer and Feinstein. Depending on how busy the office is you may get a staffer or the answering machine.

Some of you may think it may be a waste of time. WRONG! In CA, both senators have worked with the OHV community on a number of land-use bills and we encourage you to call regardless of what state you live in or what party your senator belongs to - please make those calls today. Also, forward to your email network. Let’s get the kids riding again
Posted by Don Amador at 12:30 PM No comments:

BRC Letter to OHMVR Commission for April 5 Hearing in Hollister 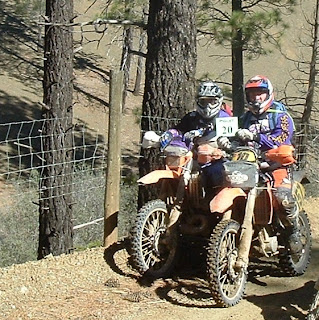 Because of the recent medical emergency at HQ, we will not be at the OHMVR Commission meeting in Hollister tomorrow. However, Don Amador, on behalf of BRC, did work on a letter last week that contains several unanswered overarching questions for the April 5 hearing.

April 4 BRC News Release (with copy of BRC letter – embargoed until 10 am on April 5)
http://www.sharetrails.org/releases/?story=729&filter=media

CCMA in May 2008 and in the subsequent NEPA planning process. HQ hopes the commission will ask the federal agencies and Congress to help resolve the obvious credibility issue that currently exists.

Be assured, HQ will be there in spirit and will be monitoring Tuesday’s events online from its rehabilitation center.
Posted by Don Amador at 11:23 AM No comments:

As some of you know, The General suffered a major injury last Sunday (slipped in mud - not OHV related) while helping with some outside chores at his mom’s house. At about noon, he tore the quad muscle/tendon off the patella.


To make a long story short, TG had knee surgery on Tuesday and is Command Post bound (no filed trips or recon) for the next 6-8 weeks. HQ appreciates the get-well wishes that it already has received from OHVers in various locations.

During recovery, HQ will be up and running doing online land-use work, making phone calls, and performing other OHV access tasks that do not require attendance at events.

There are a lot of issues in play right now and those include CCMA, youth lead ban legislation/hearings, wild lands, OHV Trust Fund, FS Planning Rule, TMR, and cost recovery just to name a few.

Be assured HQ will post timely information and updates on these and other issues.

HQ should have an update later today regarding BRC comments to the OHV commission for the Hollister hearing tomorrow.

As always, thanks for the support!
Posted by Don Amador at 6:40 AM No comments: