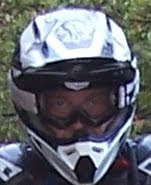 The “Green Conflict Industry” may be a new term to recent followers of The General’s blog. GCI has been around for a long time and it is no stranger to this land-use warrior.

In March, I wrote about GCI’s attack on the mountain bike community:
http://thegeneralsrecreationden.blogspot.com/2009/03/peer-sends-love-letter-to-imba.html

Later in March, I wrote a longer blog on other examples of how GCI attacks even responsible OHV use of public and private lands:
http://thegeneralsrecreationden.blogspot.com/2009/03/rta-trojan-horse-or-skunk-at-party.html

Recently, GCI has reared its ugly head in two places:

OHV/BRC has fought back and won on a number of previous cases including the original Clear Creek ESA-based lawsuit and Eldorado National Forest lawsuit. More battles are assured as GCI challenges to OHV recreation continue to mount.

Our task is to never give up and let GCI get us down. Gear-up is what we need to do.

Posted by Don Amador at 6:37 AM No comments:

The General is in the field. Will return to HQ on Mon.
Posted by Don Amador at 5:08 AM No comments:

In a recent blog, The General advised his followers to “hold the Forest Service accountable” particularly when it comes to travel management planning. A good
case study of a unit being unaccountable is the Smith River National Recreation Area.
*Photo: Trail that is open and blessed on the 1994 Forest Visitor Map, yet it is closed on the current MVUM

As you know, the NRA just published a MVUM that was apparently based on a pre-Act
(circa 1990 Forest Visitor Map - with many OHV routes not being shown) rather than basing the MVUM on the post-Act 1994 Forest Visitor Map (that showed NRA/Act “blessed” OHV routes) as was promised to the Del Norte County Board of Supervisors.

The Forest’s current and past rationale for making such ad hoc decisions (i.e. to arbitrarily close roads and trails without project level NEPA) is based on their false belief that the 1990 Act gave the NRA “special authority” to bypass the NEPA process and just close routes as they see fit.

The crazy thing is that in the 1995 Forest Plan it references that OHV projects should be “scheduled” to implement OHV use on trails and roads. See excerpt from 1995 Forest Plan:

FYI for any riders who can make some or all of the OHV commission meeting in Lake Arrowhead. It's a good chance to make your views known on access issues and to give feedback to the commission and department.

Thanks for your service!
Posted by Don Amador at 9:19 AM No comments: 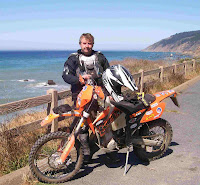 The General does his best to share good news on the rare occasion that it happens with his followers. Just recently, Judge Donald W. Molloy, a federal district court judge in Montana, denied a request by environmental groups to stop -via a motion for preliminary injunction - wolf hunts in Montana and Idaho.

We all know of or have been victims of lawsuits filed by extreme anti-OHV groups where they petitioned a court at the eleventh hour to stop a permitted OHV event(s) or activities.

This decision, correctly in The General’s view, acknowledges important U.S. Supreme Court precedent from last summer that rejects a 9th Circuit formula regularly used to justify injunctions in Endangered Species Act and other “environmental” cases. In case you’re wondering, against the anti’s cries of impending doom, as of today there have been a total of four (4) wolves taken in the Idaho season, against more than a hundred “control” actions in which wolves were killed in 2008.

The General believes that the correct interpretation of “new law” reflected by this decision should make it harder for anti-OHV groups to stop permitted OHV events or activities under the threat, or even filing, of a lawsuit. This is a very important development in the OHV legal arena.
Posted by Don Amador at 12:25 PM No comments:

NV OHV Program - A Blessing or a Curse? 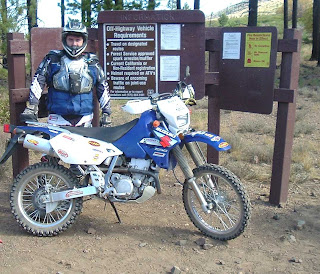 Recounting the pros and cons of your marriage is how some riders view state OHV programs. On the good side, some off-roaders believe their state OHV program is the greatest thing since sliced bread since those efforts help support riding areas with monies for trail maintenance and construction. Sometimes OHV-related education, safety, and law enforcement are funded as well.
*
Photo: The General on FS Lands Near Reno, NV
*
On the bad side, some state OHV programs appear to be nothing more than a not so complex scheme devised by anti-OHV groups or other interests (and sometimes supported by well-meaning OHV groups) to control and subsequently reduce OHV recreation in that state.

After talking with a number of riders from Nevada, I think the jury is still out on the new Nevada OHV/DMV Registration Program.
*
NV Registration Program
http://www.dmvnv.com/motorcycle.htm#ATVs
*
New NV FS/BLM Trail Ethic Website
http://www.nevada-ohv.org/index.html
*
Will the NV OHV Program be a blessing or a curse? That question will have to be answered by the off-roaders who live in Nevada.
Posted by Don Amador at 5:47 AM 1 comment:

The General fixed a glitch so that Followers can now post comments. Please
feel free to take the time to comment on my recent post on creation of
new Widerness areas or any other of my recent blogs.

Thanks for your service!!! (and comments)
Posted by Don Amador at 1:32 PM No comments: 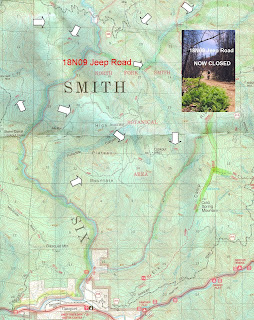 The General believes that on a growing number of National Forests - TMR has actually very little to do with addressing “repeated cross-country travel.” Rather, it appears to be laying the groundwork for future Wilderness designations by green groups and Congress.
*
Photo: Note mapped OHV routes - arrows point to OHV routes - that were on the 1994 Forest Map that have either been closed by the new MVUM or other decision (click on map for large format)
*
Nowhere is this “Wilderness creation” concept more evident than on the Smith River National Recreation Area in Northern California where a series of agency management decisions over the last decade have successfully to date banned motorized use on once legal OHV trails that were on official Forest Maps.

Just recently, the NRA published its new MVUM. As you may know, The General (on behalf of the BRC) and Del Norte County appealed and won regarding the unit’s attempt to misuse the Roadless Rule as an excuse to close mapped OHV routes in a previous TMR EA. Now the agency has used a provision in TMR whereby they simply identify “system routes” that are available for wheeled vehicle use and publish the MVUM. No substantive public process is required.

If you go to the NRA’s North Dist. Map, you will see a large block of land where use of mapped OHV routes has now been banned or was banned in a previous decision. It is a strange coincidence that public use has been banned of all mapped OHV routes in the High Plateau Mountain/Diamond Creek area and that this area mirrors the exact outline of a Proposed Wilderness Area.

Some of you may remember that in the North Coast Wild Heritage Wilderness Bill (HR233) that enviros used the rationale for new Wilderness Areas in areas that had historic and legal OHV use as follows: “…our Wilderness proposal will not close any currently legal OHV riding.” How convenient?

While protecting landscapes that meet true 1964 Wilderness Act characteristics may have value on a case-by-case basis, the OHV community should be alerted to the potential that current and future Forest planning efforts (including TMR) can and will be used to “create” new Wilderness areas out of lands once used by the public on OHVs.
*
# # #
Posted by Don Amador at 8:57 AM 2 comments: 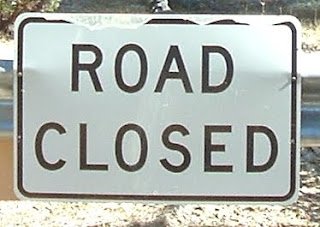 A very troubling trend is emerging nationwide in the ongoing saga of the Forest Service’s Travel Management planning effort. On a growing number of Forests, the current stage of TMR has very little to do with addressing repeated cross-country travel by OHVs as outlined in The Chief’s now infamous 2004 “4 Threats Speech.”
*
*
*
*
*
*
Text of 2004 4 Threats Speech
http://www.fs.fed.us/news/2004/speeches/01/idaho-four-threats.shtml
*
*
Rather, it appears that Forests such as the Shasta-Trinity, Mount Hood, and Humboldt-Toiyabe (and many others) are using TMR as a closure tool to make motorized public access and recreation to public lands an endangered species.
*

How TMR Got Started in 2001/2002
http://thegeneralsrecreationden.blogspot.com/2009/05/travel-management-good-idea-or-big.html
*
*
Yesterday on behalf of BRC, I submitted comments on the Bridgeport Ranger District’s DEIS.
*
BRC Sept. 14, 2009 Comments on the Bridgeport RD’s DEIS
http://www.sharetrails.org/uploads/Bridgeport_RD_DEIS_BRC_Comment_Letter_Sept_14_2009.0001.pdf
*
*
The letter points out that the DEIS is in effect a blanket closure. One concept that is described in the letter is where the agency has created a TMR-related “Bermuda Triangle.” That is where route information submitted by groups and riders from Friends of Wilson Canyon, Dirt Tricks.com, and other interests mysteriously disappeared into a bureaucratic black hole never to be seen or heard of again.

Where TMR goes from here is up to the agency. It appears they are at a cross-road where they can make the choice to get TMR back on the right trail or head off the path and into a steep ravine.
# # #

Posted by Don Amador at 7:47 AM No comments:

Howling at the Moon in OR to Stop OHV Use 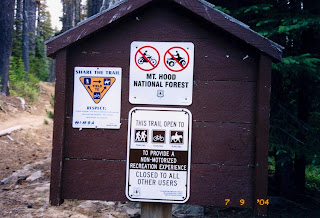 As many of my readers know, TMR is a national blessing or curse depending on what your own local Forest is proposing to close or keep open for OHV use.
*
*Photo at right taken by The General while on a 2004 dual sport ride on the Mt. Hood NF
*

Just last week, The General received in his mail a copy of the CD version of the Mount Hood National Forest Travel DEIS. Several years ago on behalf of BRC, I submitted public comments on the Hood’s TMR NOI. My initial review of the DEIS shows the Forest actually incorporated a number of our suggestions by converting some roads to trails, designating some areas, and proposing some new trails.

However, the scale of those good ideas is so small as to be almost irrelevant when compared with the fact that over 90 percent of the logging roads (over 2100 miles) will be closed to non-street legal OHVs (ATVs, dirt-bikes, and side-by-sides)

It looks like the local anti-OHV group in the area (BARK) has been very effective by going to public meetings and howling or barking at public officials in order to get the Forest Service to adopt much if not most of their anti-OHV proposals.

I have already been in touch with representatives from the
OR Motorcycle Riders Assn (see this thread for meeting times)
http://www.omraoffroad.com/forum/viewtopic.php?t=7003

BRC will be working with these and other groups during the DEIS public comment period.

Being a native of Humboldt County in Northern California (don’t hold that against me!) I am used to seeing bizarre eco-groups. However, BARK appears to have developed an effective strategy in the Mount Hood Area by howling at the moon (and at public officials) to get their way.

I wonder how that technique would work for off-roaders if they tried it at the next OHV meeting or included photo shopped pictures of wolves riding ATVs in their comment letters?

TMR is not just a CA thing.

Posted by Don Amador at 6:49 AM No comments: