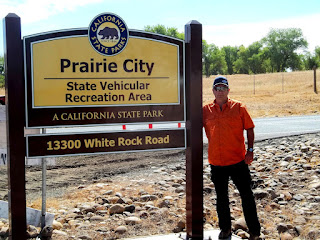 *Permission to reprint or repost is hereby given.  Photos of Don Amador avail. by request

2017 - CA OHVers CHART THEIR OWN DESTINY

Reflecting back on the hard fought “SB249” victory including tough negotiations which - at the 11th hour of the legislative session – produced an amended bill to basically reauthorize the current CA OHV program and give it permanent status by removing the sunset clause, I am reminded that our success was actually the result of a two-year process where State Park leadership started to substantively engage with the OHV community in November, 2015.

The genesis of that early engagement was the Park Transformation Process.  Agency leadership actively sought input from OHV enthusiasts, club leaders, professional consultants, and partners such as the Forest Service and BLM.  Often that input was gleaned from large turnouts by OHV enthusiasts at various transformation public meetings.

During the SB249 effort, OHV enthusiasts responded en masse to various legislative alerts to send letters, emails, or make phone calls to their elected representatives in Sacramento.   OHV user engagement was largely responsible for making “Save the OHV Program” the number one political issue in the Capitol Building.

Based on my 28 years of OHV advocacy working on legislation, land-use campaigns, commissions, resource advisory councils, etc., I have listed the key tenets in the order of the role they had in turning SB249 around and ensuring that the OHMVR Division and its skillsets were not lost in the transformation process.

One – Having an engaged State Park leadership team (with support from the Governor) over the last 2 years that networked with OHV enthusiasts, partners, consultants, and lobbyists.

Two – Having grassroots activists, clubs, and individual OHVers send in comments and make phone calls when asked - may be the most important key as they made “OHV Recreation” the number issue noted by legislators and their staff in Sacramento over the last 12 months.

Three - Having a professional OHV team of consultants, OHV commissioners, lobbyists, and grassroots leaders that embraced the challenge and utilized user engagement to champion our OHV program before legislators, conservation leaders, media, and the administration.

2017 shows that active participation by local OHV clubs and individuals is a critical element in the land-use equation.  2018 will require similar dedication by the OHV community to ensure the park transformation process honors its commitment to keeping the OHMVR Division intact and to address a myriad of other local, state, and federal recreation planning processes, legislation, and legal challenges.

2017 proves that now more than ever, you are in charge of your own OHV destiny.

Don Amador writes from his office in Oakley, California on OHV recreation and land-use issues.  Don has 28 years of experience in OHV-related recreation management and advocacy.  Don is President of Quiet Warrior Racing, his recreation consulting business.  Don is a contractor to the BlueRibbon Coalition/Sharetrails.org where he serves as their Western Representative.  Don was a 2016 inductee into the Off-Road Motorsports Hall of Fame.  Don may be reached by email at: damador@cwo.com