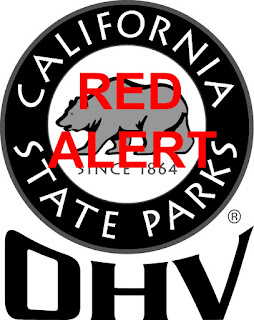 As most of you know, the Recreation HQ does not post alerts unless there is a critical issue that requires action on your part.  Well today it is issuing its first CODE RED action alert in 2019 because anti-OHV interests have adopted and implemented a highly effective trifecta of litigation, legislation, and regulation to not only block opening of the acquisition property at Carnegie SVRA but to close 20% or more of the current riding area at the unit.  Those efforts are not just limited to Carnegie SVRA, but include a proposal by Coastal Commission staff to close all of Oceano Dunes SVRA to OHV use. In addition, those closure efforts are or will also include Prairie City SVRA and Ocotillo Wells SVRA.

Many of you have already sent in letters to the legislature as SB 767 journeyed through the CA Senate and now is on its way through the CA Assembly.  As the political temperature of this bill heats up, it is now time, if possible, to attend a July 3 hearing for SB 767 before the Assembly Accountability and Administrative Review Committee at 9:30 a.m. in Room 437 at the State Capitol.  Wear your club’s shirt or jersey.  Your attendance will make a strong visual statement about your support for OHV recreation at Carnegie SVRA and elsewhere.

Today as the bill makes its way through the CA Assembly we are asking you send to send a letter to your state representative stating your opposition to SB 767 and include a short personal note about why OHV at Carnegie SVRA and OHV recreation in general is important to you and your family.

FIND YOUR STATE REPRESENTATIVE HERE
http://www.legislature.ca.gov/your_legislator.html
You have answered the call before as we have fought similar battles for the right to enjoy responsible OHV recreation on public lands in California.  And now, once again, we are asking you to answer the call to fight back.

Let’s remember on this 4th of July that FREEDOM is not FREE and requires constant vigil.

The Recreation HQ looks forward to standing with you at the July 3 hearing in support of family-oriented OHV access to public lands. Thanks for your support of responsible OHV recreation on public lands for current and future generations.