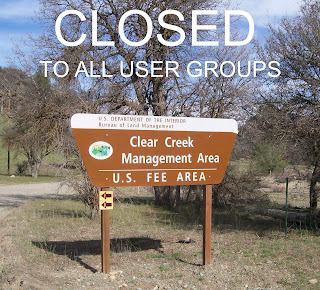 THIS CLOSURE IS BASED ON AGENCY CORRUPTION
The Recreation HQ wants to assure riders and other readers of this blog that the issue of government agencies shredding documents to avoid their disclosure because of a FOIA, public record act request, or congressional inquiry/subpoena should be a real concern.

Article on the Congress and its Agenda for Access and Public Land Management
http://www.nationalparkstraveler.com/2010/11/republicans-house-natural-resources-committee-planning-big-changes-public-lands7178

The Recreation HQ has experienced real world agency corruption on many occasions when after filing a FOIA or PRA request with federal or state government agency, The General would often get calls from his friends who worked at the agency and here is how those calls went…”Hey Don, I just wanted to let you know that we have been running the shredders here at the BLANK office because the agency does not want to be embarrassed or worse.”

The most recent example of that corruption is with the EPA Region 9 Office where they denied a FOIA asking for correspondence between the EPA, BLM, and other interests. What the EPA did not count on is the BLM complying with the same FOIA request which showed collusion and dishonesty designed to support the closure of Clear Creek to ALL publics.

2009 Overview of Agency Corruption and EPA Case Study to Prop up Closure
http://thegeneralsrecreationden.blogspot.com/2010/01/epa-violates-public-trust-at-clear.html

The Recreation HQ believes that Congress has a valid concern that agencies who have acted in a corrupt manner have already fired up their shredders or have hired shredding trucks to come and destroy thousands of documents that would show corruption, collusion with far-left wing environmental groups, or “science” that was ginned up to promote the closure agenda of the EPA or similar agencies.

The General wishes the new Congress good luck in this noble effort to acquire the public record associated with so much of the anti-access and anti-business agenda of this administration.

Thanks for your service!
Posted by Don Amador at 6:19 AM