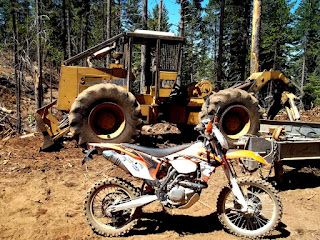 Photo from Logging Operation in Sierra NF
HQ wanted to give the riders and fans of Stonyford a pre-Christmas update on the proposed Mill Fire Salvage Timber Project.   First, thanks to all of you who sent in letters.  I heard from several of you that it was the 1st time you had ever written a comment letter - good on you for being part of the solution.  HQ was impressed with the number of letters submitted as well as the content.  I have heard the FS was impressed as well.
Based on discussions with agency staff last week, I believe the FS will utilize many of our comments in a revision of project and craft it to minimize impacts to system trails and to restore those trail segments back to trails after the project.  Also, HQ understands they will schedule the project so as to not impact the Fall enduros (i.e.  Fall enduros will happen in 2013 and beyond) and only work during the week when ridership is low.
HQ understands the OHV Program Manager and the Forest Recreation Officer are now official team members of the project.  Giving recreation and trails a seat at the planning table is a good thing!
Logging on federal lands (including post-fire salvage operations) is a very complex issue in the 21st Century.  Trails, sensitive and threatened species, storm water runoff, forest resource goals, congressional mandates, court rulings, recreation, and potential litigation are all part of the puzzle that must be pieced together by agency staff in preparation for the timber sale.  Salvage timber sales are even more complicated by time sensitivity due to insect predation on the dead and dying timber if the agency (and taxpayer) expects to sell any of the logs to help pay for the project (and create some local jobs in the process too).
HQ would like to encourage you to read a rather long article on various concepts related to post-fire salvage operations on federal lands – it is a good read.
http://news.wildlife.org/twp/2012-winter/a-new-forest-fire-paradigm/
HQ is optimistic that as we head into the Christmas and New Year Holiday season that OHVers have averted being given a lump of coal by the Mendocino NF’s original proposal and instead have the promise of being able to once again enjoy OHV recreation there including permitted events for many seasons to come.
Merry Christmas,
The Recreation HQ
*Feel free to leave comments about this blog.