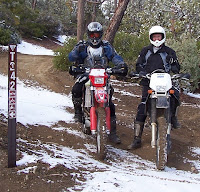 I know a lot of riders are still trying to figure out just what the heck is going on behind the scenes regarding the BLM’s closure of CCMA. The General continues to believe the closure is politically motivated and is where the agency used flawed science and a non-artful public flim-flam to effect their desired outcome.
PHOTO: BRC's Don Amador (left) and SRMC's Ed Tobin riding trails at CCMA when it was open.

As some of you already know, BRC and other public interest groups occasionally file Freedom of Information Act (FOIA) requests on federal agencies to obtain documents not otherwise available for public scrutiny. This information is then used to help BRC and its members and other stakeholders understand how federal agencies make decisions.

As The General gets ready to attend the BLM CCMA DEIS public meeting in Santa Clara on Wednesday (having already attended the Harris Ranch meeting), he asks the question, “How can the public have any confidence in this public process when the EPA denies a FOIA request – when in fact there has been correspondence between EPA and other parties for a number of years?”

Fortunately in this case, the BLM fulfilled their legal requirement to daylight information via a similar FOIA request and BRC obtained some EPA related documents. The same cannot be said about the EPA which - in The General’s opinion - violated the public trust.

The EPA’s refusal to share information with the public regarding their decision-making process at CCMA does not reflect kindly on the agency. It also undermines their credibility as the primary science-arm of the federal government.
Posted by Don Amador at 7:29 AM