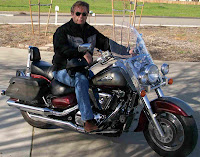 I read in the VOICES Section of the March 11, 2009 issue of CycleNews
where SF Bay Area OHV advocate, Dave Duffin, said he was ready to
start banging an old metal trash-can lid so Congress will hear our voices on
the absurd and hurtful CPSC ban on youth OHVs (and snowmobiles).

Good news for Mr. Duffin, a loud national outcry IS arising from the grassroots and they are mad as hell and are not going to take it any longer. The General visited a local KTM dealer
last week and he said that it is hurting his business and making his customers
mad.

Based on numerous recent letters from Congress to the CPSC and requests
for hearings on this issue, I would say that Congress and the media are hearing
from thousands of motocross/trail moms, angry dads, distraught OHV dealers,
and discouraged young riders.


Our friends at the MIC have a very cool Website and letter program set up. It has
specific letters tailored for the various stakeholders including riders, dealers, and families to send in. Go there TODAY and send new letters to Congressional Committees and the CPSC.

The General has already sent email letters and also printed off hard copies and placed them in the mail today.