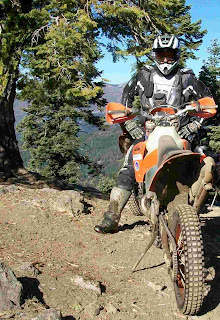 Since the Recreation HQ and Congress found out about the Department of Interior’s National Monument-related “secret documents” that were leaked in February 2010 to the public, The General has been working hard by filing FOIAs to find out just who is pushing this idea. HQ’s good friend Congressman Devin Nunes recently took the bull by the horns and introduced H.R. 5580 to stop presidential abuse - for political gain - of the Antiquities Act.
*
PHOTO: BRC's Don Amador on Designated Trail in Proposed Stonyford Obamument or NCA
*

H.R. 5580 Introduced by Cong. Devin Nunes
http://www.nunes.house.gov/index.cfm?FuseAction=PressOffice.PressReleases&ContentRecord_id=662fd8c1-19b9-b4b1-1275-60c183990d88&Region_id=&Issue_id=
Yesterday, BRC stated its support for H.R. 5580. HQ applauds this effort and that of other organizations such as the Cattlemen’s Association to support this bill.

Since a number of these monument proposals include popular OHV areas such as Stonyford, HQ urges riders to take advantage of AMA’s action alert and letter generator to let your congressional representative know of your support of H.R. 5580.

AMA Alert and Letter Generator for H.R. 5580
http://www.ama-cycle.org/legisltn/rapidresponse.asp
The General used this AMA alert to send a message and again asks you to do the same.

HQ knows that OHV is getting hit with a barrage of issues lately but urges all riders to stay the course and remain engaged.

Thanks for your service!