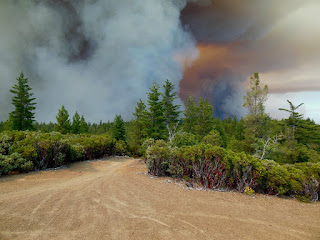 Jeff Applegate tells HQ there are no big changes overnight.   It looks like they are going to use Crackerbox as a fire line since it sounds like Gilmore has burned over on top.  Fire is still advancing toward Goat Mt. and Little Stony Canyon.  It has apparently slopped over M5 in several spots and is moving south.  Big and Little Sullivan ridges and everything to the south is threatened.    Also, Cal Fire has been using a DC-10 on the Sites Fire burning West of Maxwell towards Stonyford.   FS says the plane is not practical to use on the Mill Fire.  Little use of air tankers due to smoke.  Mostly helicopters around the perimeter to aid hand crews and dozers.  A type 2 fire team has taken over management of the fire as of yesterday.


Again, HQ believes this is a huge blow to the recreation community as this unit is a premier destination OHV area that sees visitors from throughout the U.S and Canada and is an important element in the state-wide OHV recreation matrix.