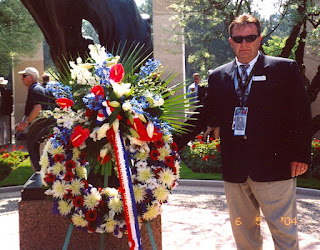 After hoisting the Flag at the Recreation HQ today, I wanted to share a thought or two about Memorial Day 2012.  I can’t help but first remember my trip to the 2004 60th Anniversary of D-Day service at Normandy where President Bush gave the following speech.
President Bush Speech at the 60th Anniversary of D-Day (a great and moving read)
http://georgewbush-whitehouse.archives.gov/news/releases/2004/06/20040606.html
That trip and tour (it was a present from my wife for my 50th birthday) was a life changing experience for me.   I got to meet and talk (and even tour) with WW2 vets who were there at D-Day.  Some told me stories they had never told to any of their family members.

My Dad served in the 97th Infantry in Europe in WW2 (he passed away in 1998).
I also remember those who served and/or died in the Korean and Vietnam Wars.   Frank Price was a Korean War Vet and land-use activist in the Bakersfield area (he has since passed away).
Gary Wilson was a childhood friend of mine and he was shot down in a helicopter in Vietnam.  I remember playing football and baseball with him and going over to his home where his mom often made Congo squares for us.  I got to visit him at the Vietnam War Memorial in Washington D.C last summer.
As I go to visit my Dad at the cemetery today, I want also want to especially remember those who have fallen (and served) in Iraq and Afghanistan.  I know many of you who have served and while many call the WW2 generation the “Greatest Generation” – I will argue (and my Dad would most likely agree) that this generation is just as great.
﻿
Posted by Don Amador at 8:07 AM